During the Renaissance period Kings, Princes and other aristocrats who had an intellectual and adventurous bent (and wanted to show off their sophistication and wealth), created what was known as a Kunstkammer or Wunderkammer – a Cabinet of Curiosities.

What did those cabinets contain?  Well, first of all, the word “cabinet” most often referred to an actual room – not a traditional piece of furniture.  Nowadays we do have curiosity cabinets; small display units that hang on the wall or stand on the floor with glass windows to display the owner’s collection of items they’re passionate about.  Those are a direct influence and to some extent the same purpose as the Wunderkammers of old – just on a smaller scale.

In reading about the Holy Roman Emperor Rudolf II and his support for alchemy, Hermeticism, and other Rosicrucian-type interests (much to the chagrin of the Catholic leadership in Rome), I came to discover this term Kunstkammer.  Rudolf had one that was the largest of its kind at the time – unrivaled anywhere in Europe. It apparently was a wonder to behold and housed in his palace at Prague.  Unfortunately there is nothing left of it after the Swedish forces plundered it when they took Prague in 1648.

Thanks to some early writings during the period we have some old woodcut illustrations of how these Wunderkammers may have appeared: 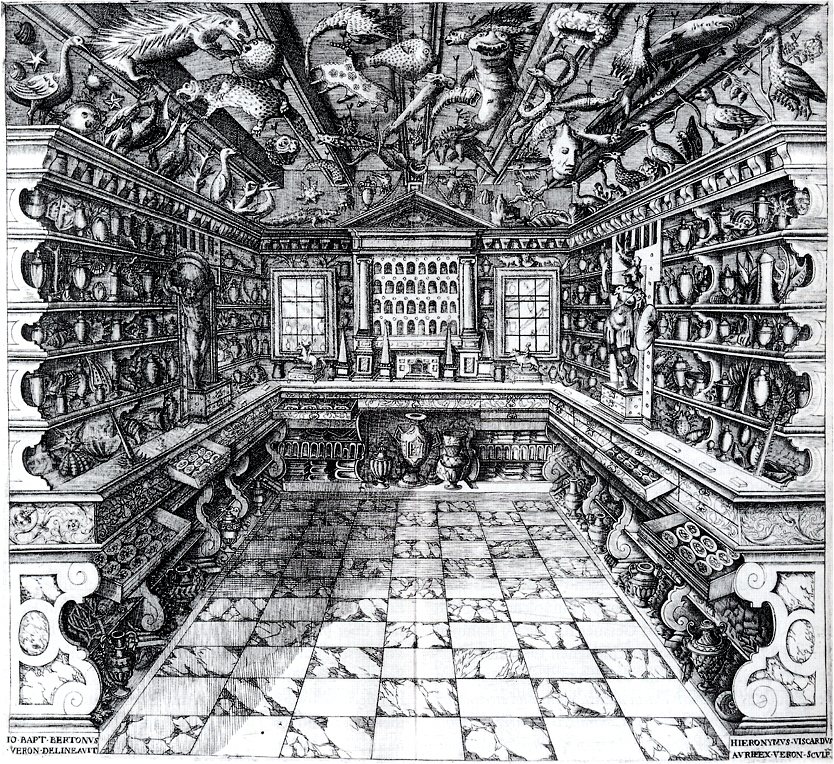 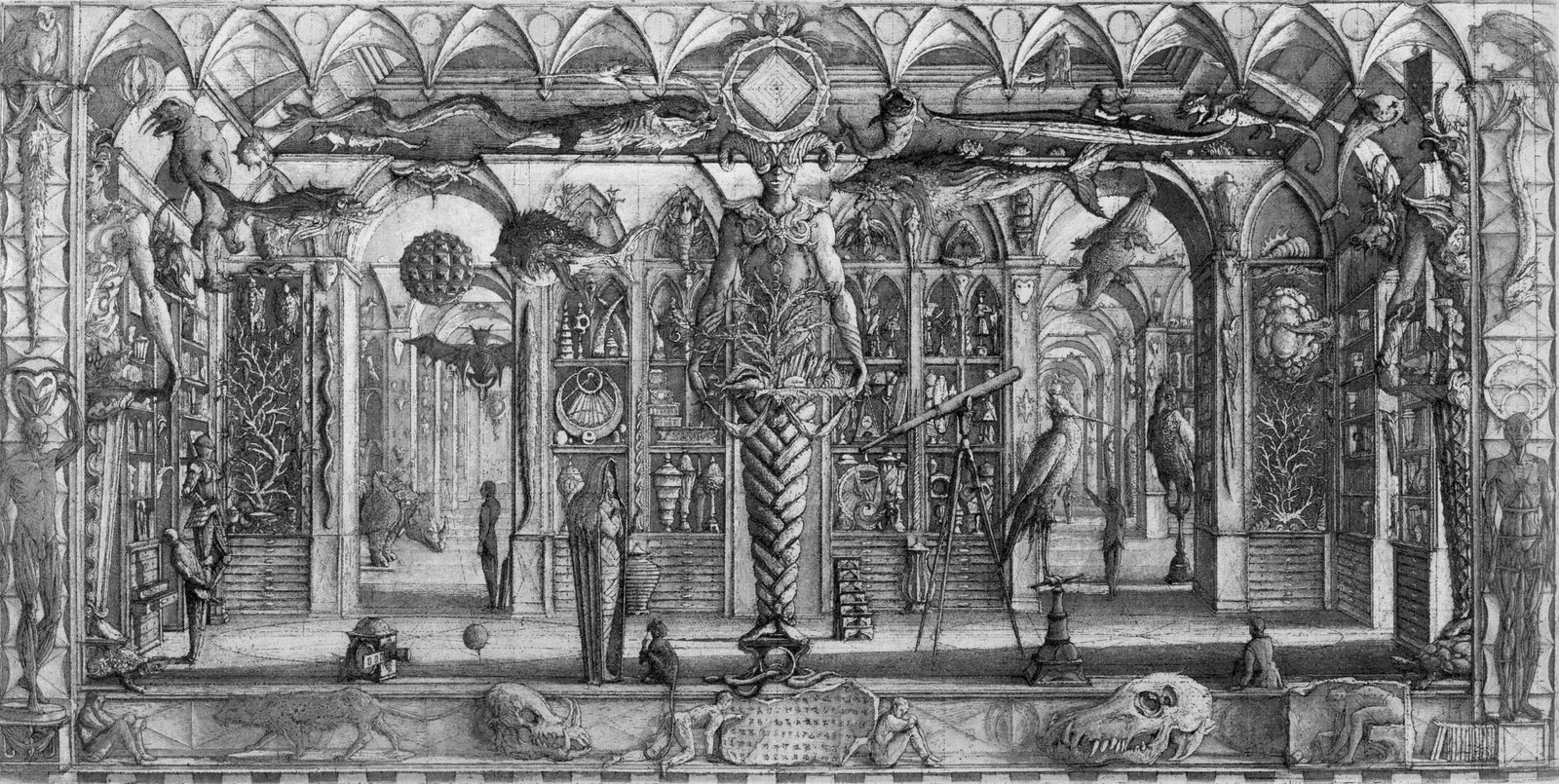 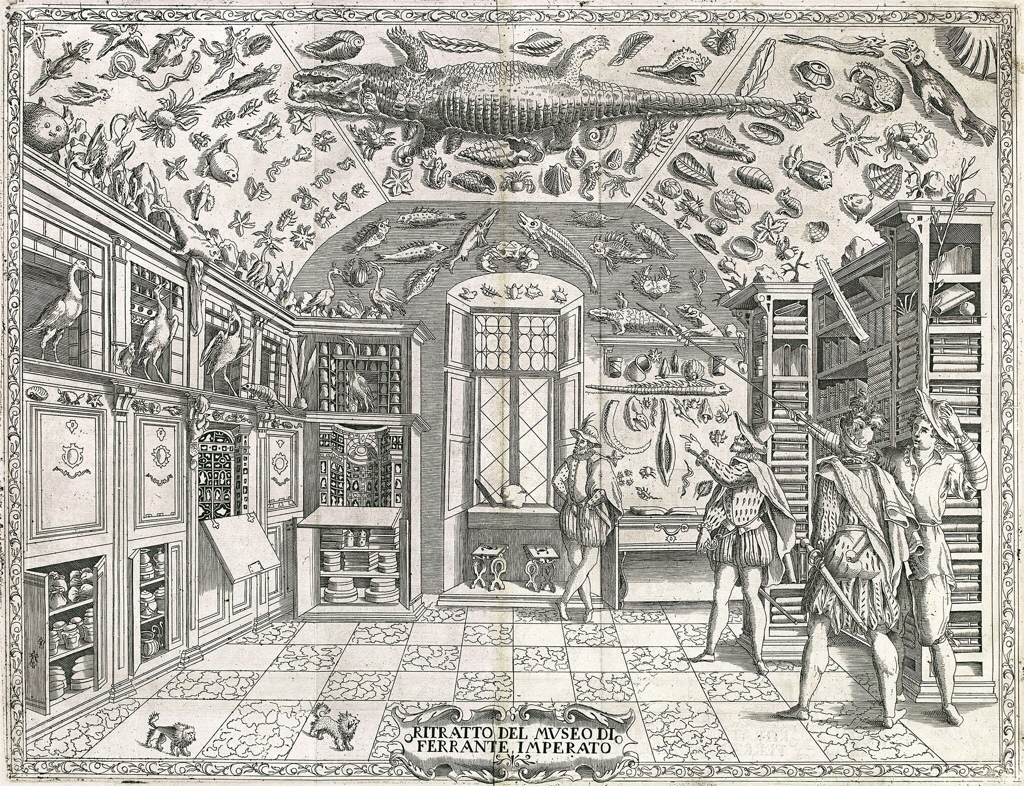 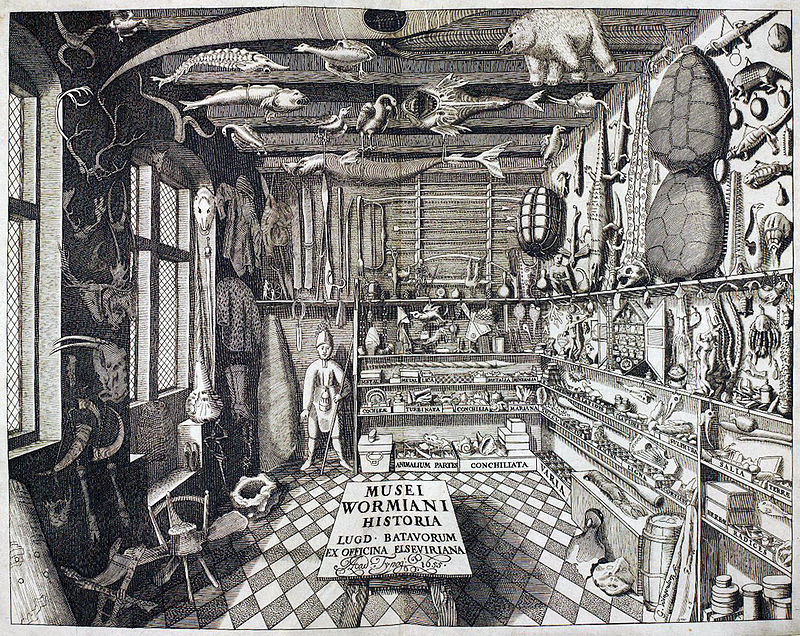 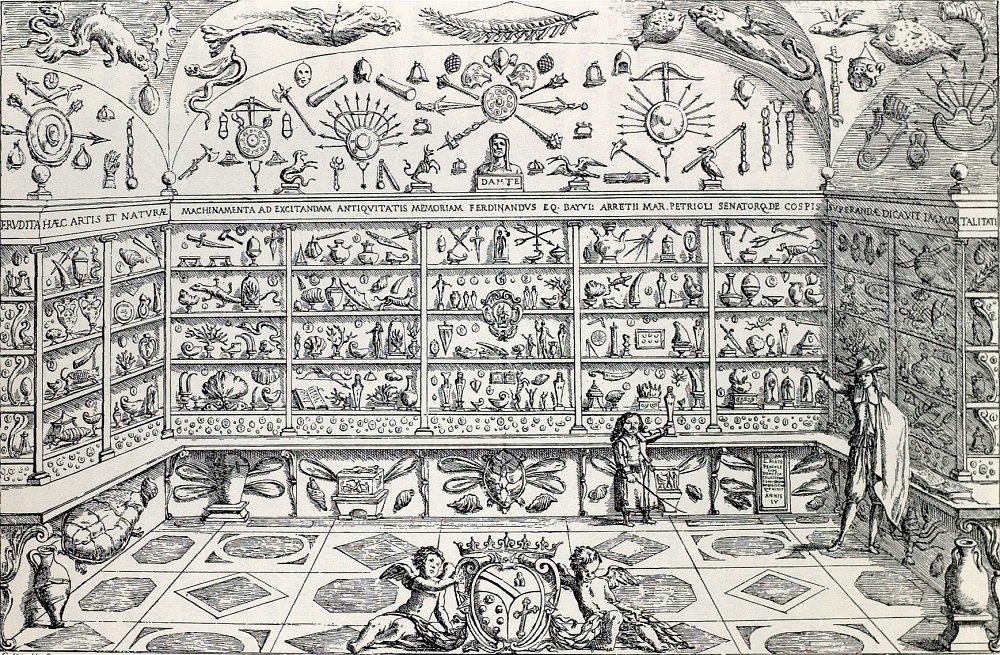 These rooms contained whatever artifacts the owner desired. During the renaissance adventurers were returning from exotic places around the world.  Many discoveries were made particularly in terms of nature and the animal kingdom.  Frequently these Wunderkammers would contain collections of rare and bizarre creatures and other items found on these global travels.  Contents could also include antiquities, rare manuscripts, rocks & minerals, religious relics, works of art, scientific and medical instruments, automatons, etc.

These collections are a physical tribute and symbol to the mysteries of the universe and discovery.  They were the precursor to modern museums.  Unfortunately nearly all of them were decimated or liquidated long, long ago.

Even as time goes on, and museums established, the common man with limited resources still found a passion to display their prized collection. It might be a shadow box, curio cabinet, a corner of an office, or the decorative theme of a home library.

The key here, I think, are exceptional individuals called by their interests – to pursue, collect, and display the fruits of their passions – those elements that resonate with their souls.  The display might be an overt attempt to impress their visitors, but more often than not I believe it is a creation of aesthetics; a way to surround themselves with objects that enhance and drive their imagination, creativity and enrichment of life.

I’m always impressed with interesting personal libraries and collections of modern individuals, but I haven’t discovered one any more impressive than Jay Walker’s Library of the History of Human Imagination.  I would dearly love to spend days immersing myself in its wonders!

My personal library is a constant work in progress/passion – all because I absolutely love surrounding myself with an artistic and intellectual aesthetic that fuels my creative drive and appeal to wonder.  I believe this is the intent of most of us who share the passion to create our own personal Wunderkammers – a tribute to the wondrousness of the world and its inspiration for us.

Satiate your soul with the wonders of the Universe!  Embrace the fascination and excitement of new discovery!  Dive deep into the little-known and unappreciated gems of the world!  Enrich your life!