Our trip to Spain this month found us visiting some incredible sites.  One of our notable visits (for me, at least) was the Monastery and Royal Palace of El Escorial in the town of San Lorenzo de El Escorial; specifically the Royal Library. 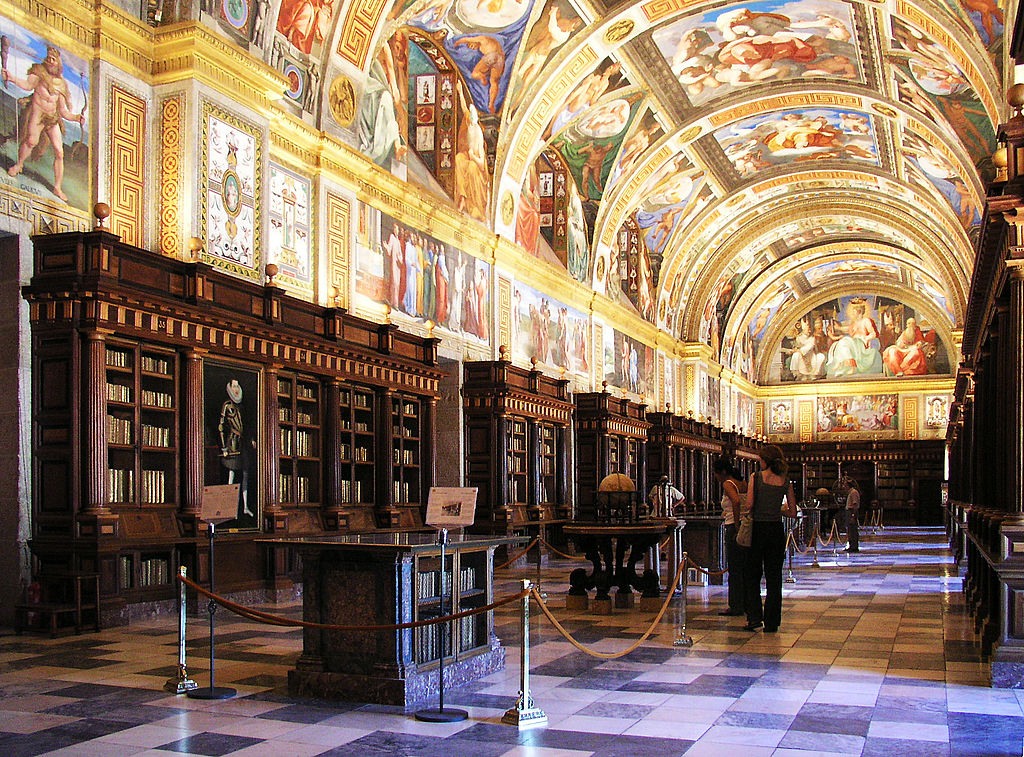 The library consists of several rooms (most of them no longer used), however, only the Main Hall is opened to the public.  Measuring 177 feet long, 30 feet wide and 33 feet high it’s one large, wondrous gallery of gorgeous woodwork, frescoes, globes, armillaries and books.  It was established as the Royal library by Phillip II when the palace/monastery was created in the late 16th-century.

The library is believed to have been finished about 1585.  It was the first large-room library to use the “wall system” of book storage – where the bookshelves sit flush, lined up along the walls. Prior to that, libraries used lecterns or stalls to hold and store large folios. The initial 4,000 volumes came from Philip’s personal library, as well as additional books and manuscripts belonging to the Crown but kept elsewhere.

Books were purged over the centuries, particularly by a fire in 1671, but the library still maintains about 40,000 volumes including a number of Latin, Greek, Hebrew and Arabic manuscripts.

The library was designed by architect Juan de Herrera. The Herrera-designed bookcases were built by José Flecha, Juan Senén and Martín de Gamboa. The frescoes were painted by Pellegrino Tibaldi based on a theme defined by Father José de Sigüenza. You can see the influence of Michelangelo’s Sistine Chapel paintings in these Tibaldi works.

The themed friezes are anchored at each end of the hall by semicircular tympanums; the northern end is Philosophy (acquired knowledge) and the southern end is Theology (revealed knowledge). In between the two, within the seven main panels on the ceiling, are representations of the seven subjects of the liberal arts: the Trivium (Grammar, Rhetoric, Dialectics) and Quadrivium (Arithmetic, Music, Geometry, Astronomy). Along the sides directly above the bookcases are images of significant historical figures and scenes corresponding to the liberal art designated on the ceiling above them.

Details about the frescoes:

The vault is occupied by personifications of the Liberal Arts and Sciences, painted di sotto in sù and surrounded by giants. In the lunettes are representations of individuals, from antiquity onwards, who had cultivated these disciplines. Scenes on the friezes refer to the trivium and quadrivium. Of the former, Grammar is represented by the School of Babylon and the Tower of Babel, Rhetoric by Hercules the Gaul and Cicero Defending Gaius Rabirius, and Dialectics or Logic by SS Ambrose and Augustine and Zeno of Elea Showing the Gates of Truth and Error.

Of the quadrivium, Arithmetic is represented by the Gymnosophists and Solomon and the Queen of Sheba, Music by Orpheus Rescuing Eurydice and David Playing the Harp before Saul, Geometry by the Death of Archimedes and the Priests of Egypt Dividing the Lands and Astronomy by the Solar Eclipse at Heliopolis after the Death of Christ and King Hezekiah Contemplating the Orbit of the Sun.

Philosophy on the north wall (the School of Athens with Zeno and Socrates) and Theology on the south (Constantine the Great at the Council of Nicaea) complete the programme as the basis and goal of knowledge. The upper library is decorated with a comprehensive series of portraits of saints, pontiffs, sages and artists.

The books are shelved with their spines inwards towards the wall; the gilt-edged pages face outwards with the title written on them – ostensibly to protect the bindings from light and allow the pages to “breathe.”  The effect is quite impressive with gold shimmering at the visitor from within the shelves.

The center of the main hall has tables with a collection of maps, globes, astrolabes, and other scientific items – including an outstanding, huge armillary sphere built by Antonio Santucci about 1582. The world and celestial globes were made by Joan Blaeu about 1660. These items conveyed the scientific dimension that Philip II desired for his library.

I was mesmerized by the room’s beauty and grandeur; and was particularly enchanted by the frescoes and what/who they represented.  I was trying my best to discover the various historic figures’ names represented in all the panels on ribbons next to each.

The library fell into neglect after Philip II’s death in 1598.  There was also the aforementioned fire in 1671.  Philip V decided to create a national library in Madrid and therefore the El Escorial library discontinued any additions to its collections.  Finally, the library was reorganized and catalogued in 1885. Thank goodness it was saved and preserved. It’s a gorgeous and magnificent tribute to knowledge, discovery and beauty! 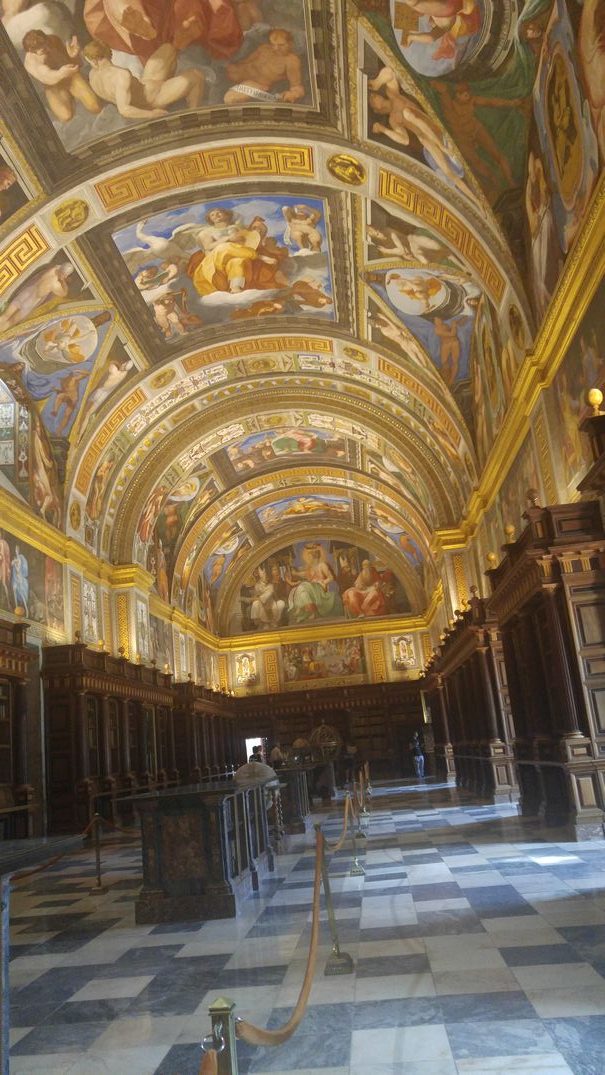 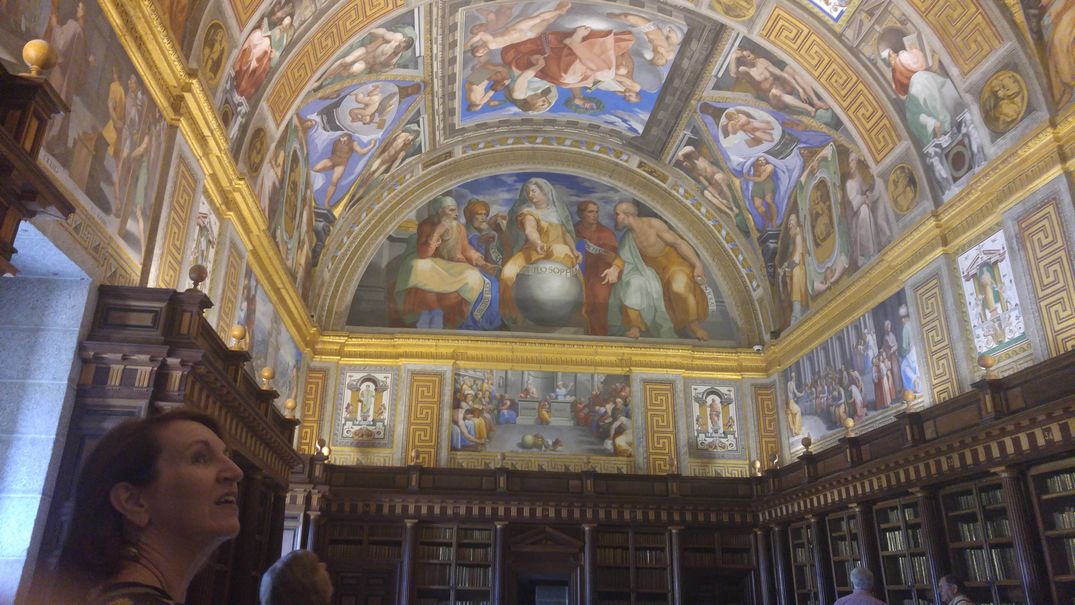 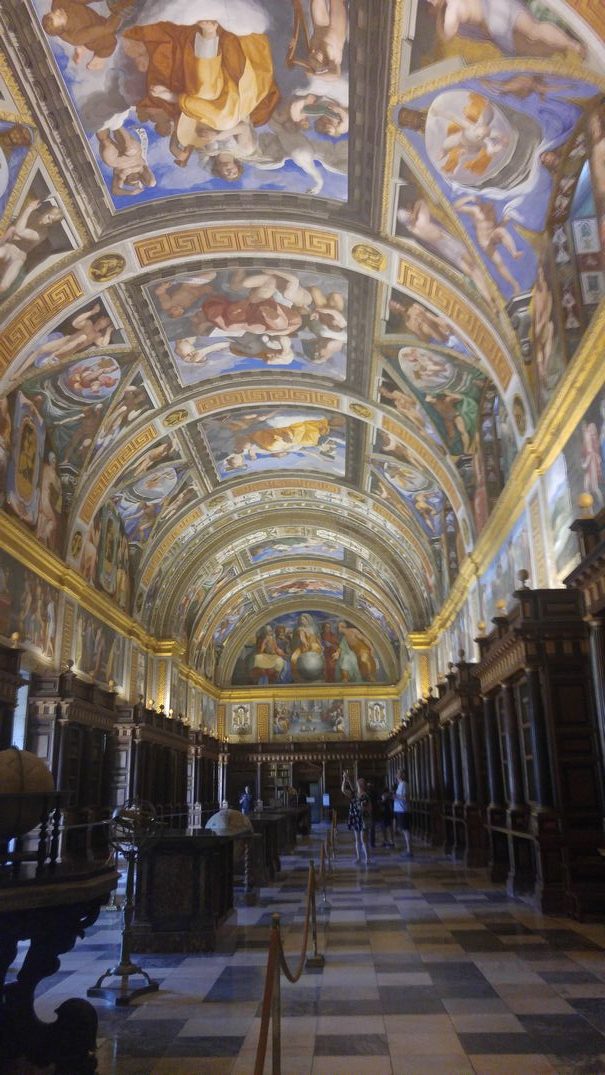 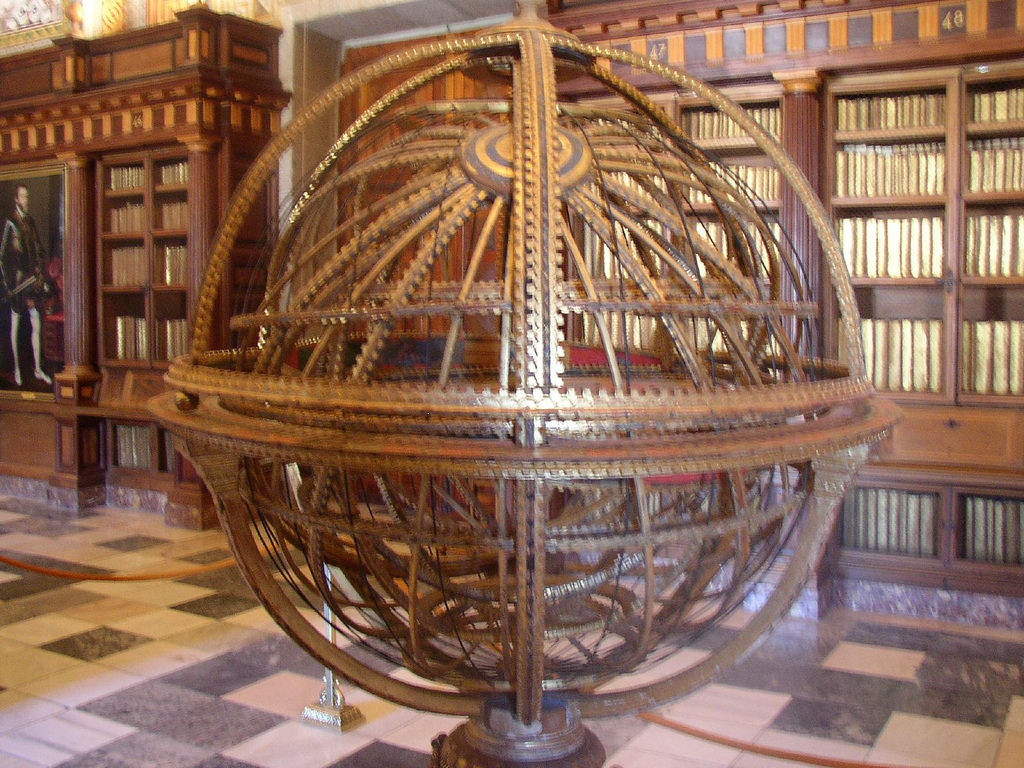 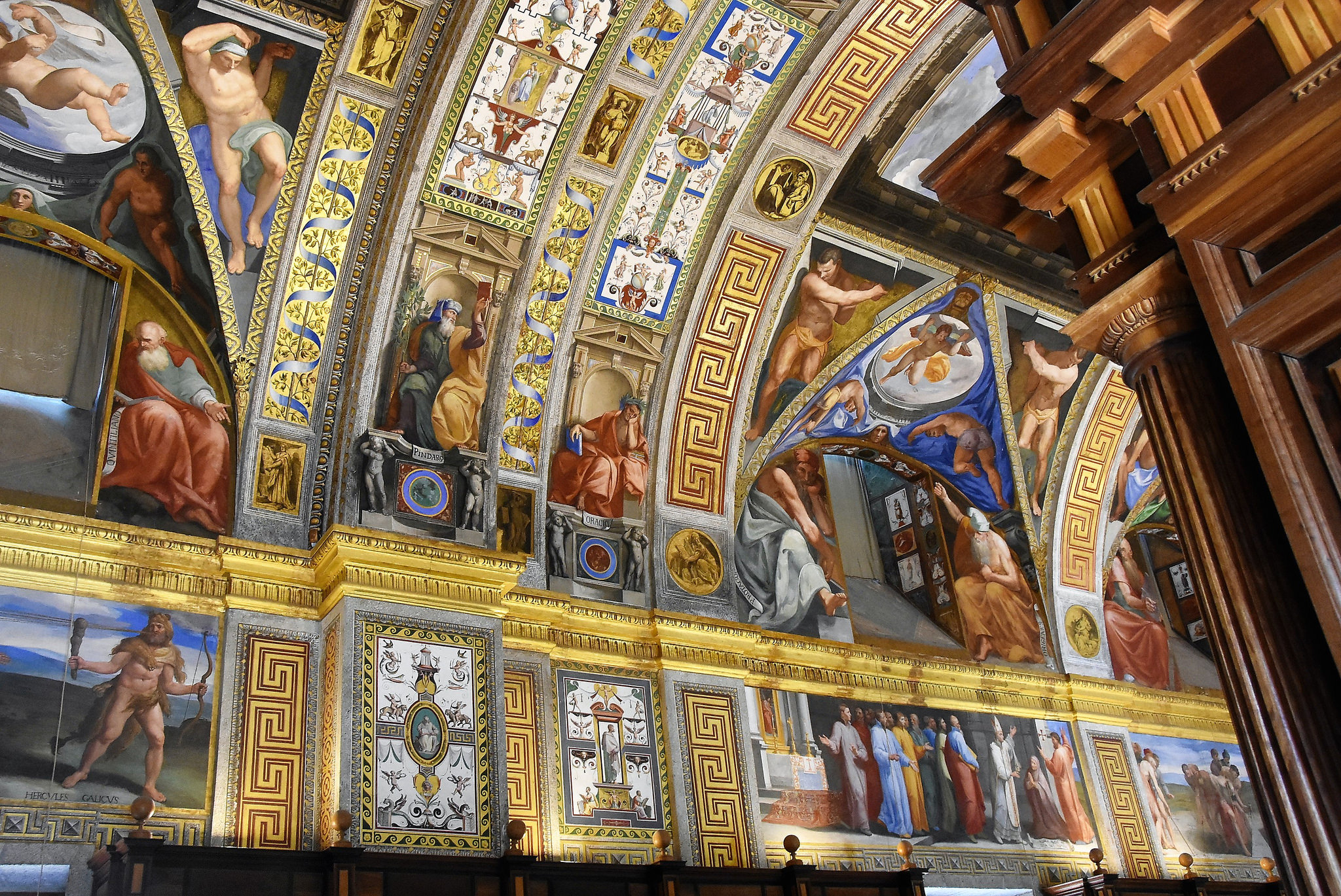 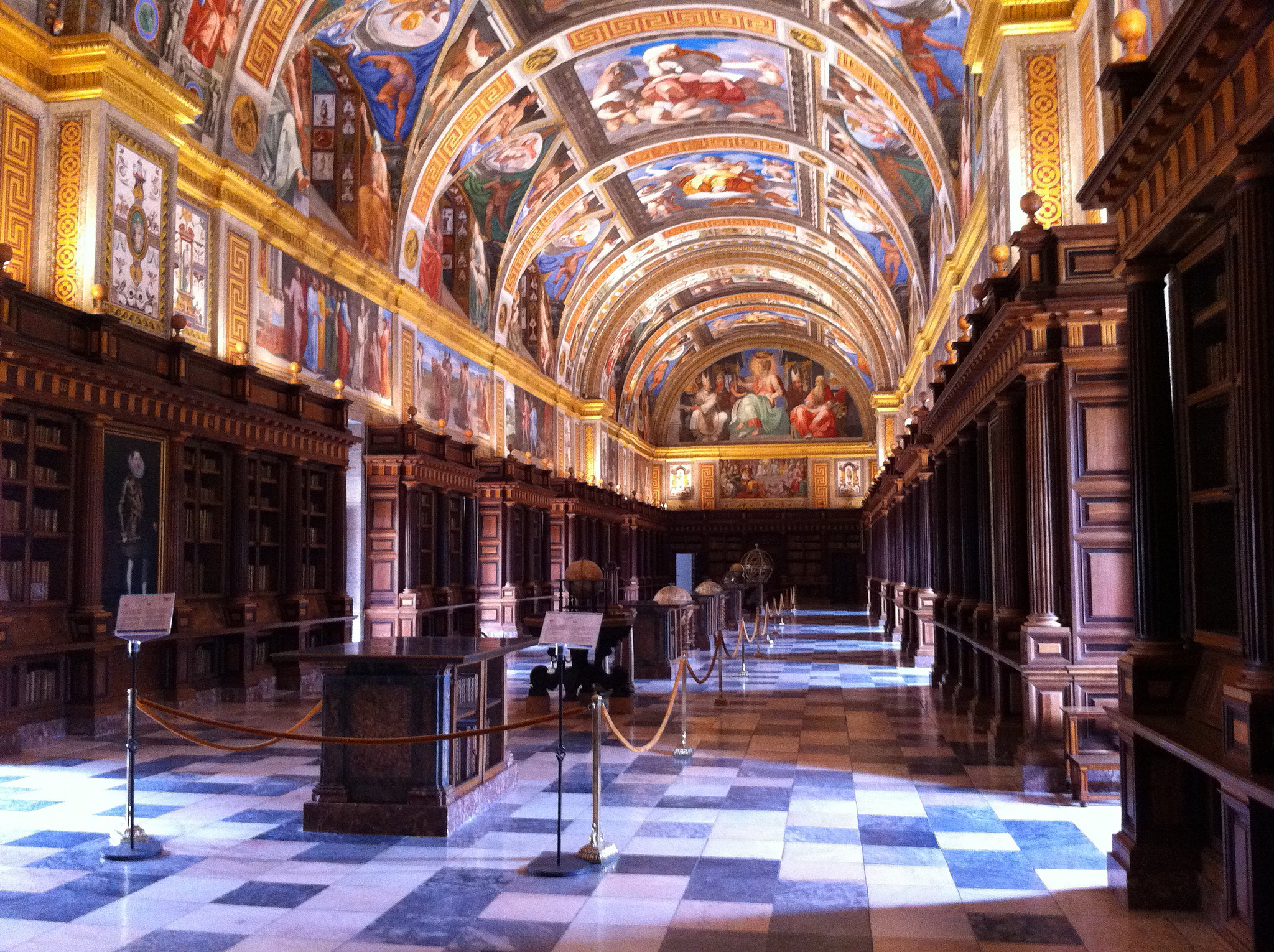 “The Library at El Escorial” by John Keogh is licensed under CC BY-NC 2.0