I previously wrote a brief article regarding Reality but for this entry I want to delve a bit deeper into what I’m really after when I speak of “Truth” and/or “Reality.”

Starting in my late-30s I began a road to discovery (both internal and external). I began to question, to wonder, to investigate. Much of it had to do with the wonders of nature, the universe, science, history, philosophy, and cultural norms, but it also involved digging in deep to discover who I really am, my core values and why I’m here on this orb. Prior to that I was quite a bit lost in life. No real vision or “purpose” other than my family, some hobbies and making it through the work week. Mundaneness. Recurring depression was the norm.

Through years of my questioning and growth process I discovered my passions – what really lights my fire.  What are they?  Truth, Beauty and Freedom.  In this entry, I’ll flesh out the Truth portion of that trio.

When I speak of Truth I’m not referring to “Personal” truths, “Social” truths, “Religious” truths or “Scientific” Truths. What I’m after can best be described as Objective Reality:  That which exists outside our senses, interpretation, even our biological existence. It would be what it is – whether we ever know of it, sense it, measure it, photograph it, etc.  Existence exists. [The process of true Science is the best approach we have, but even it has far to go in order to get beyond its flaws. More to come in a later article.]

I have an insatiable drive to get to this Truth – it is my “capital-T” truth: REALITY. I will always doubt and question claims to the truth for any topics critical to my interests. I must question claims and dig deeper in order to get closer and closer to the ultimate Truth: Objective Reality.

I found this diagram recently and I think it really gets to the core of what I’m after: 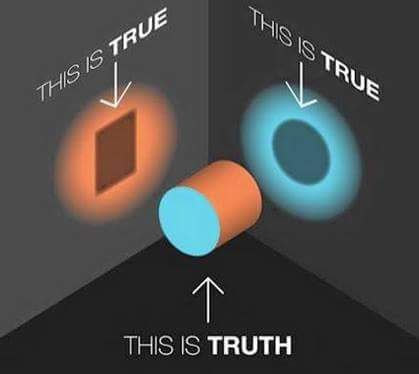 Each interpretation is true to a point – from a limited perspective. But each are a shadow of Truth/Reality.

Then I found these two additions/expansions for this graph that initially gave me pause.

Yet when you step back and consider each graphical progression, they are representing the same thing:  The object at the center of the graph represents Objective Reality. All views of it are but a glimpse of what it really is.

Perspective, Interpretation, Biases, Sense Limitations, Lazy Thinking, Flawed Analysis, Blind Belief, Lies, Deception, Dogma, Misdirection ALL can give even the most ignorant or intellectual person in the world some concept of a true view of the Truth. The mistake is stopping the search when you have but one understanding/perspective in your possession.

I get very excited when I have an “aha” moment wherein I am able to shift from one perspective and interpretation into another. There’s a thrill and adventure bouncing around discovering each of these interpretations on the boundary with the ultimate goal of ascertaining the Objective Reality in the center – the absolute Truth.

This drive to identify Objective Reality applies to my focus on several fronts:

I want to dig as far as I can to get to that object in the center of the graph – the unchanging, unflinching Objective Reality of what really is or what really happened; beyond ignorance, scientific or religious dogma, blind belief, biases, corruptness or propaganda. I’ll most likely never get there, but I’ll always have fun discovering and knowledge adventuring on the way!